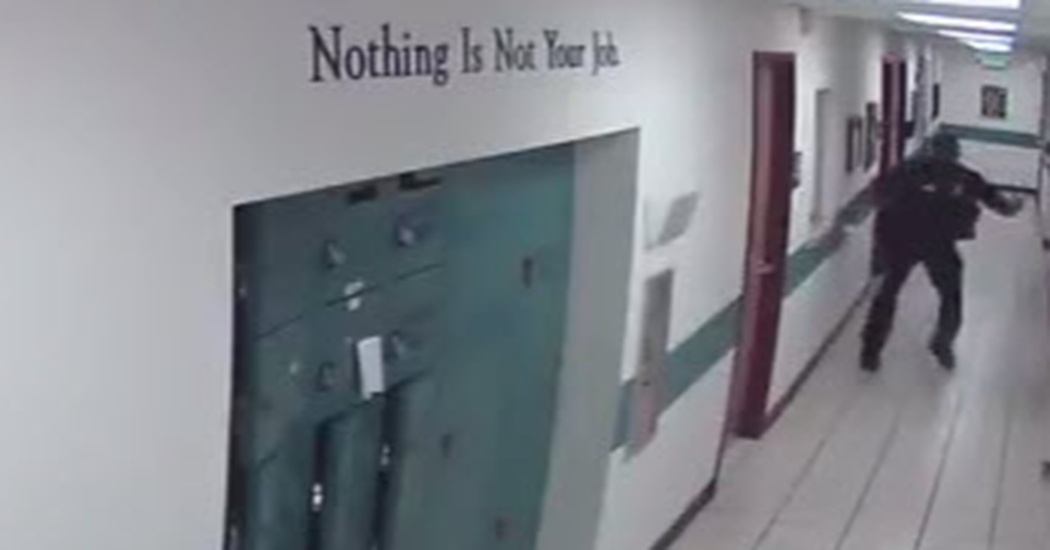 The life of a police officer is one that most people would not ever consider doing. They do more things on a daily basis that we would consider frightening than most of us do in a year. Of course, there are times when the job may be somewhat dull but that is punctuated by moments of sheer horror. It takes a special type of person to put on a badge.

Although we look at cops as being special people, there are times when we get to see the human side and we recognize that they are people after all. That is what happened to this police officer, and it was a closed-circuit camera that managed to catch him in action. He wasn’t busting a bad guy, nor was he doing anything official, but what he did do is taking the Internet by storm.

When we first see him walking down the hall on the closed-circuit camera, he looks as if he is probably getting off shift. It is then that he gets the surprise of his life, because a rat goes running down the hall directly at him! You would think that a police officer, who manhandled bad guys and is often up against some of the most rough characters would be able to handle a rodent quite well. As it turns out, he takes off running in the opposite direction and it isn’t until he is a safe distance away that he finally turns around and looks at his opponent.

Life can be funny sometimes and you never quite know what you are going to run into. Regardless of whether you are a police officer or not, when you are surprised, you will do the unexpected. It is unfortunate for this police officer that the unexpected moment got caught on camera.