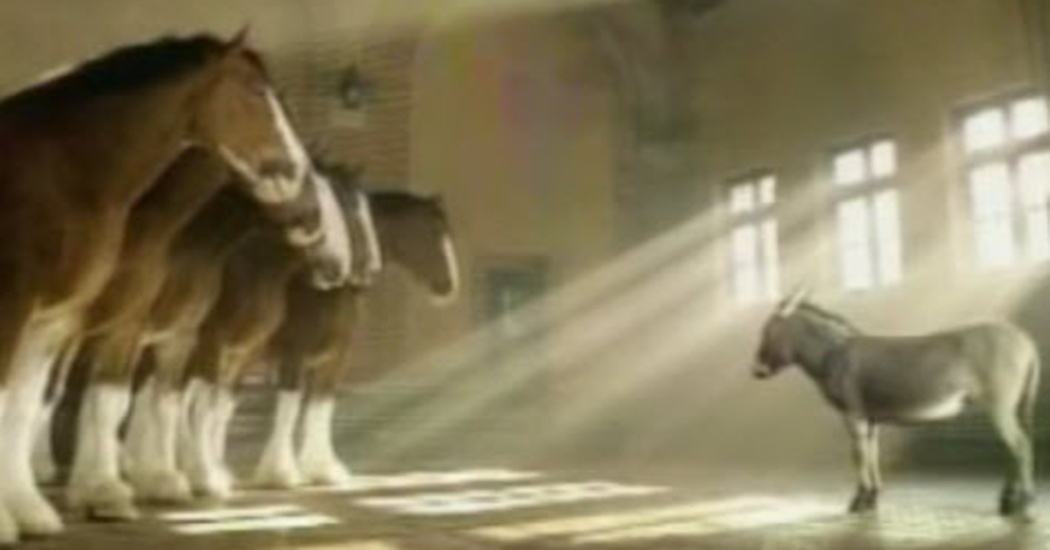 Like many people, you probably remember the story about the Little Engine That Could from your childhood. It is not a story about a train necessarily, it is about coming up against seemingly insurmountable obstacles and giving everything you got in order to accomplish the impossible. Many of us have lived by those words in the story the majority of our lives.

This video is about another little engine that could, but it is not a train, it is a donkey that is up against a difficult to achieve goal. You see, ever since he was a baby, he had a dream and it is a dream that is seemingly impossible for any donkey to achieve. He had the dream of becoming a Clydesdale horse, and he did what he could in order to achieve it.

Throughout his life, he would do everything he possibly could to live up to the image of a Clydesdale. He would practice his special walk that only Clydesdales have and he would even practice by pulling a cart with some Budweiser in the back. Perhaps one of the more interesting things that he did was to try some hair extensions on his legs, which did look strangely as if he was a Clydesdale. Yes, he lived his life like the little engine that could and then came the big day when he stood before giant Clydesdale horses for an interview that would change his life.

It isn’t really the fact that this donkey felt that he could be a Clydesdale, it was how he responded to those Clydesdales during the interview. In the end, you will be surprised with what happens and I don’t want to ruin it for you, but let’s just say you’ll be cheering out loud.

We use cookies on our website to give you the most relevant experience by remembering your preferences and repeat visits. By clicking “Accept”, you consent to the use of ALL the cookies.
Do not sell my personal information.
Cookie settingsACCEPT
Manage consent

This website uses cookies to improve your experience while you navigate through the website. Out of these, the cookies that are categorized as necessary are stored on your browser as they are essential for the working of basic functionalities of the website. We also use third-party cookies that help us analyze and understand how you use this website. These cookies will be stored in your browser only with your consent. You also have the option to opt-out of these cookies. But opting out of some of these cookies may affect your browsing experience.
Necessary Always Enabled

Performance cookies are used to understand and analyze the key performance indexes of the website which helps in delivering a better user experience for the visitors.

Analytical cookies are used to understand how visitors interact with the website. These cookies help provide information on metrics the number of visitors, bounce rate, traffic source, etc.

Advertisement cookies are used to provide visitors with relevant ads and marketing campaigns. These cookies track visitors across websites and collect information to provide customized ads.

Other uncategorized cookies are those that are being analyzed and have not been classified into a category as yet.